Abortion is considered a taboo subject that most people are not comfortable discussing. Of course, most people are more than willing to give their opinion of whether they are pro-choice or pro-life, but very few understand the topics and controversy surrounding the subject or the rabbit hole of subtopics that the discussion may illicit. Because it is such a taboo subject, most women who have had an abortion are quiet about their decision, perhaps out of shame, fear of judgment, or because they feel alone in their guilt. With so many options for mothers of an unplanned pregnancy or unwanted pregnancy, it is difficult for the general public to understand the stress and overwhelming fear that an unplanned or teen pregnancy can have on the pregnant woman and why abortion may seem like a viable option. In today’s post, we are going to discuss a common, but rarely discussed, consequence of going through with an abortion — post-abortion stress syndrome — and how you can prevent this devastating condition.

At AIM Adoptions, we support women who have found themselves experiencing an unplanned or unwanted pregnancy. We offer services and support to help these women find the best option for both themselves and their babies. We respect a woman’s choice to decide what is best for her family, but want all pregnant women to be aware of all of their options and the pros and cons of each. We have seen far too many women feel alone, overwhelmed, and make hasty decisions they later regret. With the right support and access to resources, we believe we can help build strong families.

Before we jump right into how you can prevent the symptoms of post-abortion stress syndrome (PASS) or post-abortion stress disorder (PASD), we think it is important to share some background information on the condition. For more than 30 years, trauma and grief counselors who have helped survivors of trauma overcome their past, it has been wildly accepted that abortions cause symptoms that closely resemble post-traumatic stress disorder (PTSD). Even in women who were pregnant at very young ages, had a medical condition that warranted the abortion, or were pregnant as the result of sexual violence and chose to terminate the pregnancy, many had severe, long-term mental health symptoms related to the abortion. However, to this day, neither the American Psychiatric Association nor the American Psychological Association recognizes these conditions as true disorders and will insist that the woman is simply suffering from depression or PTSD. 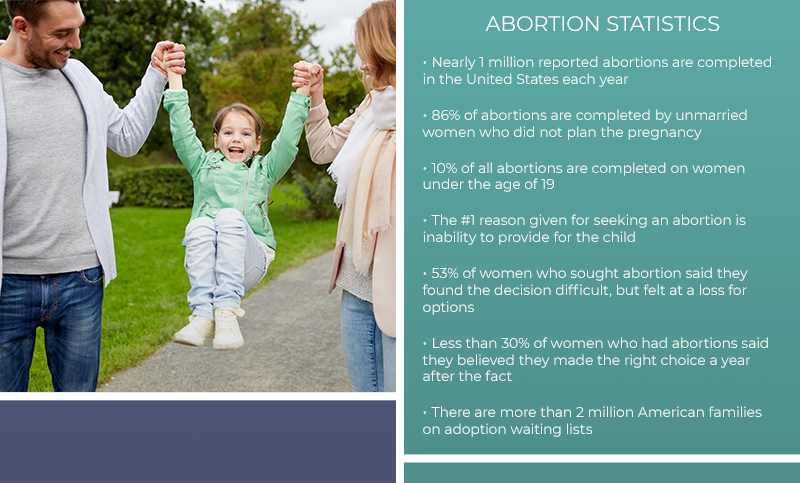 The decision to go through with an abortion is not one that most women do not take lightly, and it is a very stressful life event. Many women who consider or go through with an abortion feel alone and at a loss of what to do with an unplanned pregnancy. Abortion seems to be the solution to “get rid of the problem,” however, for many women, this solution causes more problems than it solves. Because abortion is considered taboo or deviant, most women who complete an abortion do so alone and feel like they are not “allowed” to feel grief, loss, or sadness if they chose to have the abortion done. This serves to exacerbate symptoms and worsen the problem. Regardless of the reason for the abortion, PASD or PASS may present following an abortion and symptoms include:

In one study conducted to research the longterm effects of abortion suggested that 55% of women who had undergone an abortion had at least one symptom of PASD/PASS, while 16% of those women had more than three persistent symptoms. An additional 30% of women had symptoms that matched PASS/PASD, but could not be specifically linked due to a diagnosis of PTSD that resulted from sexual, physical, or emotional abuse or violence. This means that less than 15% of the women included in the survey had no longterm emotional effects after having an abortion.

After reviewing all the studies and facts, it is clear that not getting an abortion is the only way to completely prevent the symptoms of PASD or PASS. However, we would be remiss if we didn’t discuss exactly how we can achieve this. Most women who went through with an abortion said they felt like they didn’t have any other option and more than 75 of women stated that they were not ready for a child — due to age, income, life status, partner involvement, etc. There was not a single woman who stated that she felt the baby would be better off dead and less than 7% of abortions were completed for concerns of fetal or maternal health. What this means is that offering support and resources to those remaining 93% of teen moms and women experiencing an unplanned pregnancy offers us the chance to prevent nearly 1 million women from experiencing the symptoms of PASS and PASD.

At AIM Adoptions, we understand what a frightening and overwhelming time pregnancy can be — even for mothers who tried for years to get pregnant and find the pregnancy to be a blessing. When a pregnancy is unplanned, the fear can be daunting and very few people know where to seek help. Our staff is here to help Texan mothers find the resources and options that they need to make the best choices for themselves and their babies. While we are a Houston adoption agency, we know that adoption is not the right answer for everyone. When you contact us, we will work with you to assess your situation and needs to help you determine what is right for you. If you are pregnant in the Houston area, or anywhere in Texas, reach out to us and let us put our more than 35 years of experience to work for you. You are not alone and abortion is not your only option. Contact us to learn more.